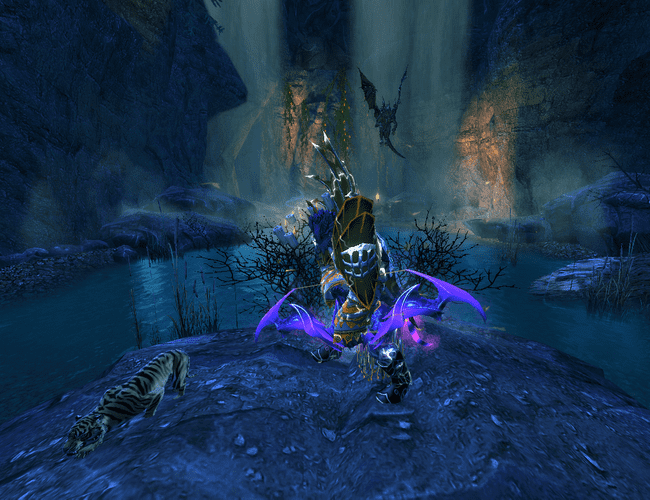 I have been playing my Hunter Ranger class for a while on neverwinter now.I feel like I have enough experience and knowledge of the class to make a guide for those that are interested / curious about how I play my hunter. For excelling or reaching its full dps potential Hunter Rangers(HR's) have a relatively high skill ceiling compared to most other classes. What this essentially means is that you would have a higher number of actions you have to perform on rotations (you will be pressing a lot of keys really fast). In the guide that follows I would be describing how I have built my ranger and how I play it in content and my openions on it.

The race and class feats

As with most of my dps classes I have choosen dragonborn for hunter. Reason for this being dragonborn gives the most stats percentages, 3% Critical Strike and Power and 10% incoming healing. These are really good stats for a dps class and simply the best given that most other races dont give that much offensive percentage stats so I have choosen this for for most of my dps classes including the Hunter Ranger.

For the ability scores I put all into strength(STR) and dexterity(DEX). Strength translates to percentage damage for your class and dexerity translates to critical serverity both of these being important. Putting in points into charisma(CHA) didn't make much sense for me as it directly translates to forte percentage which is is split into Power , Accuracy and deflect for Hunter Rangers. Since its split into both offensive and defensive stats like deflect it makes less sense to get more percentage ratings on forte rather you would have the critical serverity which would ultimately end up being a higher offensive stat.

There is only on real path to do the most single target damage. It is the hunter paragon path, warden may be arguably competitive for AOE but other than that it is not really something you want to play for single target damage as far as damage is concerned!

These are the feats I use, I will describe my feats mostly focused on single target.

For single target class feats I mostly use is Crushing roots and seekers vengence(if no one else has tutor or aspect on I switch to aspect of the pack).

I will describe how these feats synergize with my rotation in a later section.

Currently I run 3 distinct builds for single target, and one build for AOE. However for now I have only explained a few builds below, I would be adding all of my builds later on and updating this article. 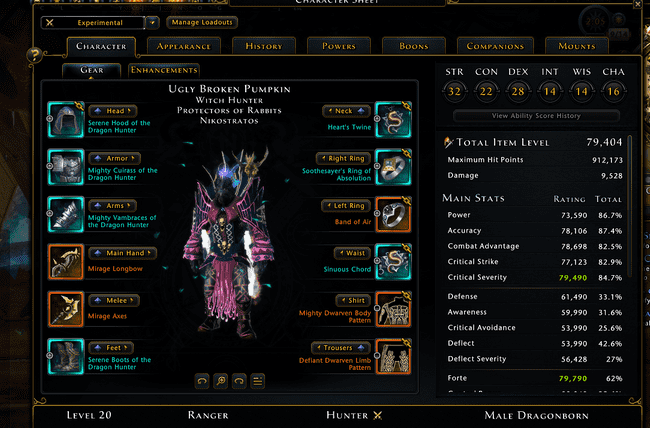 This high accuracy build is usually straying away from the popular mainstream builds using Owlbear cub or the Icosahedron Ioun Stone companions. This is a cheaper companion offering better overall percentage stats than those other two arguably. If you notice there is more things that actually contribute to damage than just stats or ratings.For an example this build dosent use the Combat Advantage shirt , and thus have the bonus to cooldown reduction from shirt and the bonus stats from the pair of shirt and pants. Its important to notice that the shirt gives about 20% Cooldown reduction(1 sec reduction every 5 seconds) this is a lot you give up if you choose to not use it. The reason why I use festival tiger is you can cap / near cap all your offensive ratings including forte with it. And your forte would generally be higher than what most other people have by about 10% - 16%, and capping forte ratings is a good thing as it translates to percentage stats for your class. 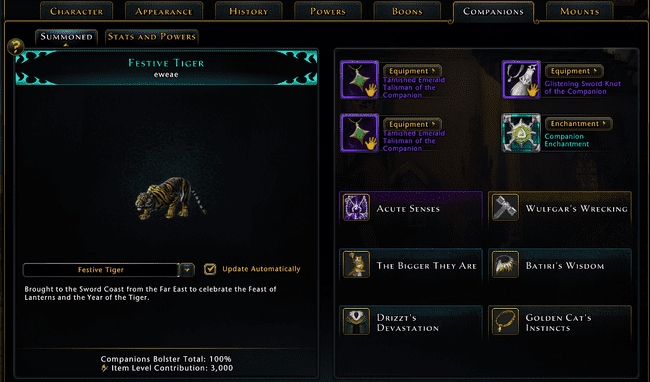 The insignia bonuses are as follows:

Insignias used are mostly dominance with a few Aggression and Skill to balance out stats. 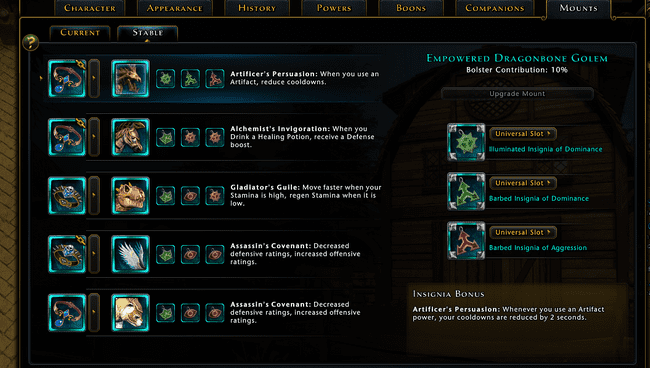 Enchantments used are as follows : 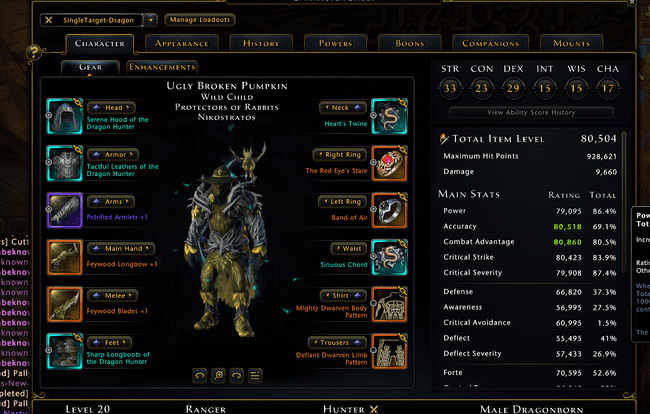 This is a specific build I refined over some time just for Crown of keldegonn (Master). This is a fine balance between percentage damge bonuses from gear + companions and some really decent stats. I use the undead ring 10% here since the dragon seems to be undead as well across all phases, considering the ring works for mobs and valindra It seems to be the best one to use provided you dont sacrifice a lot of stats for it. I Have managed to do a decent job of balancing out the two. You can reach some really high DPS with this build. 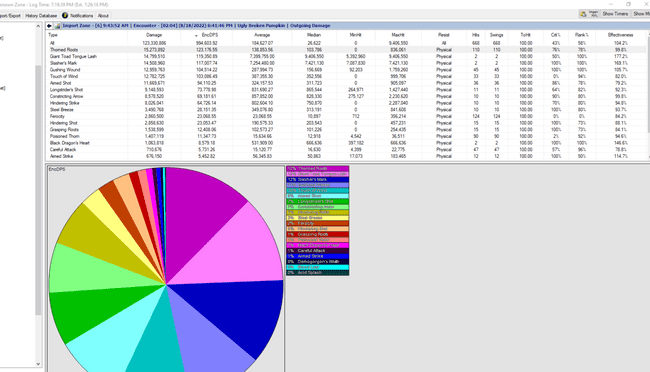 As you can see even with support phases (2x). You can reach potentially this or more dps depending on the debuffs / buffs used on the dragon. 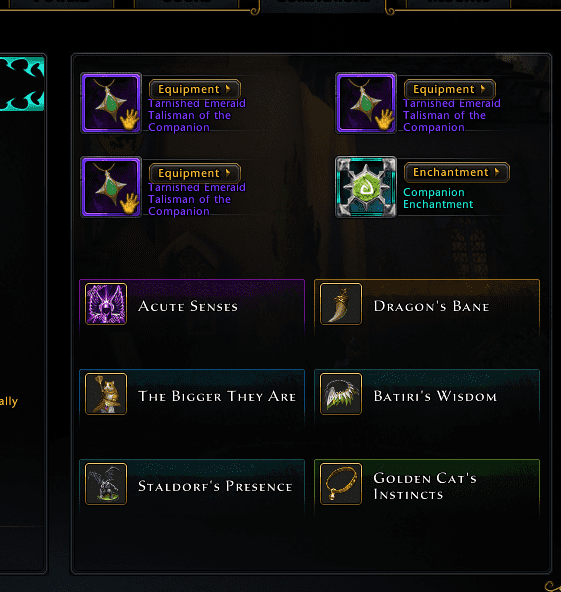 The insignia bonuses are as follows: 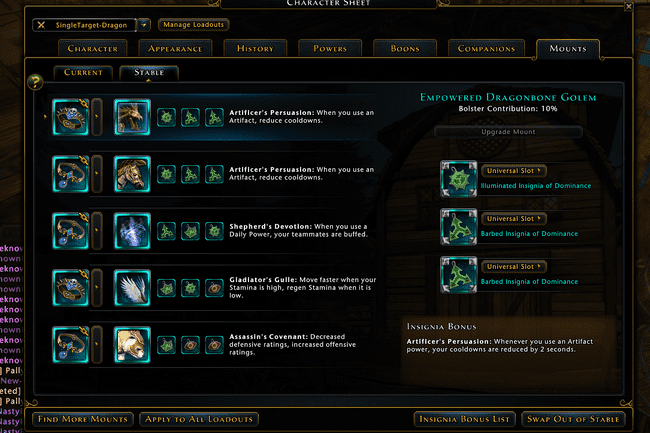 Enchantments used are as follows :

This I basically derived off the above Single target build and tweaked a few things. For one thing Batri would be of little use on AOE so I swaped that in for the 7.5 % flat damage bons from Neverwinter Knight. And then for good measure I respeced feats. as the feat to use with Slashers mark for single target would be of little use here. There is little use in using a single target daily that drains all your ap when there is a bunch of mobs. So using Disruptive shot and feats around it would be best in this situation. However its completely fine if you just swap around Batiri companion bonus on your single target build and not have a seperate build or use one for AOE, you won't miss much !

As for abilities in single target I use mostly Constricting arrow, Cordon of arrows and Hindering shot.

For class feats I made slight changes. I use crushing roots and aspect of the serpent since its very hard to make sure you are behind a bunch of mobs to use seekers vengence.

And for mount powers I use Ferocity along with Arcane Maelstrom.

Other than these the rest remains the same as the one mentioned on generic single target build above.

Hunter ranger is a class I really enjoy because it's the only true Hybrid class in neverwinter offering equally competitive damage on both it's melee and ranged stances. When you play a hunter its important that you embrace both these as it is the key to more damage. You ideally want to play like a melee class that is always as close as possible to boss. My playstyle as an HR has progressed on over the last few months, I kinda learnt in order to do good damage you want to be as aggressive as possible even more so than most other classes if you really want to get that high output of dps. Being aggressive however requires good knowledge and awareness of dungeons and trials and a guess of you and your groups potential. When I say this to most they have a weird reaction to this because most think being aggressive is a bad thing... but really its not,it's about you taking more calculated risks and having more confidence in your abilities and class. It dosen't mean ignoring mechanics etc, It just means you optimise damage while doing mechanics. Examples for this would be constantly doing damage while doing mechanics like spread(you are a hybrid class make use of it's strengths). Another example would be like getting a full rotation on the halaster during ice phase before you go hide in ice and even while moving to position you can still use atwills. The more aggressive and more aware of these timings you are, you can optimize damage more.

As for your rotations it generally needs to be really fast. The more encounters you get off the more damage you do. Using atwills between the cooldowns of your encounters is really important too, most miss out on damage there where they forget to do atwills(aimed shots).

Single target rotation I start off in the following way :

However like most things there is always exceptions. A rotation never takes priority over conditions and situations on a trial or dungeon, sometimes you can't get close to boss or use melee encounters In those situations just use ranged and atwills / improvise. Important thing is to keep hitting the boss and as the battle starts off and progresses there would be no true rotation. Use things on cooldown don't wait for one encounter while the other is off cooldown. Getting more encounters off will ultimately lead to more damage than a perfectly executed slow rotation. After the first rotation I generally tend to use things on cooldown I wont wait or hold on and keep a perfect rotation, in practice its not worth it.

Feel free to leave any feedback or comments. Please do also note this guide is still a work in progress and I will update all of my builds into this. For now there is only one generic ST build briefly explained along with my rotations and a few tips.